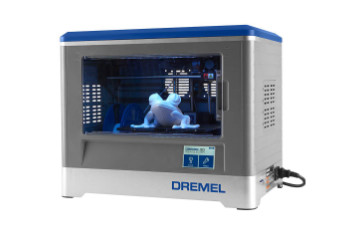 When I went looking for a 3D printer it seemed like there were a ton of them, so what made the Dremel 3D20 stand out? Read this Dremel 3d printer review and find out! My concern with my first 3D printer was primarily about getting a printer that I could actually learn to use quickly. Reading forums, what I saw was mostly people comparing the value of features, more or less ignoring the ease of use for new users. This concerned me as I was hearing terms like manual leveling vs automatic leveling, slicing, PLA vs ABS, heated build plates vs unheated, and many more. While I am into technology, I did not want to purchase something that I simply would not use because it was too much trouble to learn.

Initially, I liked the Dremel 3D20 and other offerings because they claimed to be aimed at new users and schools, and include everything you need to get up and running quickly. This is not an uncommon claim from manufacturers however so a little more digging was in order.

My first stop was 3dprintboard.com to ask people in the know if the Dremel 3D20 was the printer I needed. What I posted what this:

I have no experience with 3d printing at all and am looking for a good starting point. What I would like is a printer that requires the minimal amount of assembly or setup, and is very easy to use. I am happy to sacrifice some size or capabilities for ease of use.

From what I understand the Dremel Digilab 3D20 is simple and pretty much ready to go. It is also readily available and priced reasonable. I like that it is ul listed and fully enclosed.

Any reason I should stay away? Anything that fits my needs better?

What I received about the Dremel 3D20 was from a super moderator who had been on this forum for almost six years and read in part:

nope decent printer – it’s actually a rebadged flashforge dreamer.
Well depends on the on the model – dremel now sell several printers with widely varying price range.
But the 3d20 is a flashforge dreamer 🙂
https://www.amazon.com/Flashforge-Dr…0846553&sr=8-9
Though I think the dreamer is a bit less money 🙂

The dreamer itself is a slightly reworked replicator clone – very good and stable design that’s been around almost as long as desktop 3d printers themselves.

I also read several reviews of the Dremel 3D20 from other sources which seemed to reinforce what I received from 3dprintboard.com. That was enough, I ordered one.

So how did it do?

The hardest things about the setup with the Dremel 3D20 are removing all the styrofoam packing material and figuring out the filament loading process. Removing the packing is just time-consuming, and the filament you simply shove into the top of the extruder when the loading program tells you to.

The reason the pla filament loading is confusing is that the instruction for the Dremel 3D20 show you cutting off the filament while it is sticking out about half an inch, so do you feed it in and then cut it? If so, at what point do you feed it in again?

From the best I can tell the picture of cutting the filament is showing you how to swap filaments in the Dremel 3D20, not how to initially load it. If this had not been my first 3D printer it would have been obvious.

Including those two little things, the whole process of setup and preparing the Dremel 3D20 for printing took about fifteen minutes.

The Dremel 3D20 comes with an SD card loaded with some Dremel 3d printer projects for you to test the printer out with. I really liked this as at this point I had no idea how to get a file the printer could print. I chose the child’s dice file and told it to print.

I sat there watching the first item being printed by my new Dremel 3D20, called my wife in to watch, and just about giggled as I watched it create an object from the PLA melted off the roll. Slowly.

The image above shows two sides of the first print out of the printer. Yes, I was duly impressed that I had a real object I could hold in my hand. No, I was not impressed with the quality of the print. The side in the right of the image is not bad but you can see a few little issues in the top of the dimples, but on the side on the left the problems are more obvious. Was it me or the Dremel 3D20?

The next print out of the Dremel 3D20 was another of the included Dremel 3d printer files, a chess King, and looked a little better. The biggest problem from this Dremel 3D20 print was a little cleanup needed around the cross at the top of the piece, other than that, it looks good! Of course, this is where I start to learn about print quality and that you need to clean up your prints after they are printed, something I never really thought of.

The third thing I decided to print with my Dremel 3D20 was also the first thing I had downloaded. It took a while to figure out how to download the STL files, install the slicer from the Dremel website, slice the files using the Dremel digilab 3d slicer, save them to the SD card in the correct Dremel 3D printer file format, and get the Dremel 3D20 started, but I got there. This is something I have always wanted to build a model of but they can be quite expensive. When I saw I could print one out with my Dremel 3D20 I jumped at the chance. It isn’t that detailed, and I am sure I could have done a better print job if I knew how to use a good slicer, but that’s OK, off I went! I made a lot of mistakes with this, not the Dremel 3D20’s fault, from trying to clean it with various tools (hints: Don’t use ANY power tools, or wire brushes, ever) but I still had more fun than should be legal. I learned a lot about printing, slicing, downloading files, resizing files (I printed this out at 85% because the largest piece was too big to fit in my Dremel 3D20, it still measures about 13″ assembled), cleaning, and more.

I should mention that at this point I was almost completely out of the filament the Dremel 3D20 came with.

The biggest pro is the fact that the Dremel 3D20 is indeed fast and easy to get set up and printing right out of the box. This is what I wanted, to be able to get started printing with as little muss and fuss as possible, and in that, the Dremel 3D20 delivers.

I also liked is that the Dremel 3D20 is fully enclosed keeping the noise down and the internal temperature stable. Since this is in my office and I have been doing prints that average eight or more hours, being relatively quiet really helps.

The Dremel 3D20 also is UL listed which I thought was very important since I am doing long prints I really want to make sure that I, and my fur babies, are safe when it is printing through the night or while I am at work.

I do wish there was a link to a good set of videos explaining things, or even an old-school DVD included in the box. While the included instructions are sufficient to get you printing using the Dremel 3D20 and included SD card, it is nowhere near enough to really introduce you to the world of 3D printing.

The Dremel 3D20 was exactly what I was hoping for, a reasonably priced, easy to set up, and quick to get you going 3D printer well suited for people who know nothing but want a plug-and-play solution. Are there better 3D printers? Probably. Is this a great place to start? Absolutely!

If you want a fantastic place to start your journey in 3D printing, you will not go wrong with the Dremel 3D20.

I  hope you enjoyed my review of the Dremel 3D20!