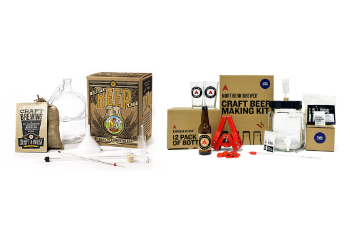 No one wants to come over and watch that slideshow of your vacation photos unless there is free beer involved! Pick up one of the kits on this list and invite them over to try your latest sensation. If you enjoy it enough, expand your kit and start selling to your local pubs, the sky is the limit! I wanted to start my best beer brewing kits list with something that was inexpensive for the beginners but produced a very high-quality beer, which meant starting with the Home Brewing Kit for Beer by Craft A Brew. All the basic components are here with no fluff which keeps the price down, but the result is just amazing.

This kit comes in a variety of flavors and they are all quite good, Oktoberfest Ale is probably my favorite. Try them all yourself! They have some of the best beer ingredient kits out there.

Not only is this a complete starter kit, but you can clean and sanitize the kit when you are finished, buy new ingredients kits and use it over and over again. Since the ingredients kits are made by the same people, they are made to work together and ensure you get a great brew, every time. I love Craft A Brew and their kits, they are squarely aimed at people who just want to brew a little beer at home for themselves and their friends and that makes everything they do perfectly sized for me. For something that includes a little more try the Northern Brewer – All-Inclusive Gift Set. They advertise this kit as having absolutely everything you need to brew your own beer. While that isn’t quite true, there is no boiling pot, for example, it does include pretty much everything not already found in the typical kitchen which makes this an excellent deluxe home brewing starter kit.

This really is a great kit and I love the inclusion of bottles and pilsner glasses. If you want to make someone feel like a real brewmaster, this is one of the best beer brewing kits to start them off with. You can go from nothing to two six-packs of bottled and capped beer with this kit. Yup, they even include the six-pack carriers an metal caps. It really is just about everything the budding brewer might want. This makes it an idea craft beer brewing starter kit.

Northern Brewer, much like Craft A Brew above, has a whole range of kits and ingredient packs so when you have used up all the ingredients in this kit you can simply order new beer recipe kits from the same people and keep right on brewing using the same equipment.

Where they are different in that they are aimed more at people who want to grow into something a little larger. Northern Brewer offers chillers, burners, transfer pumps, and even their own grain mill! If you think you might want to get serious into brewing your own beer, this is the company to start with. The Mr. Beer 2 Gallon Complete Starter Beer Making Kit falls somewhere in between the first two on the list of best beer brewing kits as far as expandability goes. While Mr. Beer does have several refills and even has bottling kits where you can bottle your own beer (minus labels) complete with metal caps and a case box, they do not have the larger and much more serious equipment that Northern Brewer does.

This does not take away from the home brew kit however as the kit is excellent and includes everything you will need that isn’t already in most kitchens (pot and stove).

Two things make this mr beer kit stand out; the unique keg fermenter which is, in my opinion, the best of any kit, and the fact that it is made by a real brewery who will answer your phone call if you need something. Yes, the fermenter looks a little gimmicky, but if you look past that, it is a very high-quality piece for the money that is very well thought out. The Brooklyn Brew Shop Everyday IPA Beer Making Kit is a good middle of the road kit that has some refill packs allowing you to reuse your equipment and produces a good beer. In fact, they have some of the most interesting ingredient packs including grapefruit honey and jalapeno saison which is a large portion of why this kit is on my list of best beer making kit as they are some of the best beer recipe kits out.

Brooklyn Brew Shop also sells bottling kits, cappers, and caps should you want to start bottling your creations although their selection of accessories and additions is not as extensive as Northern Brewers or even Craft A Brew.

What I do not like is the instructions and lack of real-time support. If this is not your first time brewing beer at home, or you don’t mind using google a few times while working, and you like uncommon beer flavors, this could be the best beer making kit for you. Last on the list of best beer brewing kits is the Simply Beer – Small Batch Beer Making Starter Kit which is exactly what it says, simply beer. This is the easy, simple, small, no-nonsense home brew starter kit I give to people who I suspect will use it once and throw it away.

That isn’t to say this is not a good kit, it is! It is just that unlike the other kits on this list of best beer brewing kits they do not offer refill kits (although their original ingredients come from Northern Brewers so I suspect you can use theirs) and they offer no expansions such as larger fermenters, bottling packages, etc.

So while this is the cheapest and least reusable kit on the best beer brewing kits list, it absolutely can produce a quality beer so it is better suited for someone who has no real interest in becoming the next Sam Adams.

I hope you enjoyed my article on the best beer brewing kits!