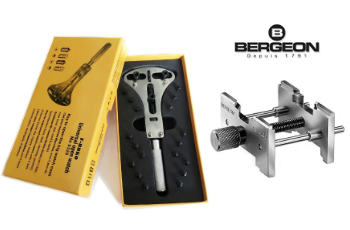 If you are going to seriously repair watches, there are ten must-have tools for serious watch repair. Sure, if you want to replace the battery in your $20 watch you bought from Walmart, you just need a couple of little things you can get cheap. If you want to be able to do that and change the links in the band, a few more tools. Most of all that you can get in a cheap kit which includes many of the basic tools needed for watch repair. But if you want to repair broken watches for other people, or repair and resell them, you need better stuff.

The most used tool on my workbench is my screwdriver set. Heck, I use them on stuff even when I am not working on watches. Quality screwdrivers are a must, not only because they make your job of removing those incredibly tiny and delicate screws easier, but because cheap screwdrivers bend, break, and destroy the heads of the screws you are trying to remove.

You think you have a problem when your mechanical watch is overwound and you need to remove the mainspring? What happens when you go to remove the screw holding it in place and the head strips so that you can no longer get a screwdriver blade in there? Yeah, that isn’t good. 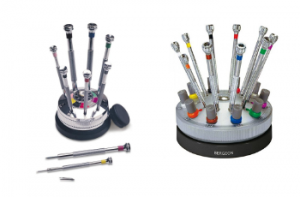 If you can’t see what you are doing, you can’t fix it. I have seen people use loupes, struggle with reading glasses, heck I saw one guy trying to use an actual magnifying glass. Don’t be that guy. Get something that will let you forget about it and just fix the watch. Besides, how can you use must-have tools for serious watch repair if you can’t see them? 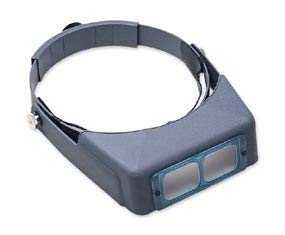 For that, there is no better tool than the Optivisor #10 Magnifying Visor. Put it on, flip it down, go to work. You won’t be fighting with it, it will provide sharp and clear magnified views, and you won’t have that funky red circle around your eye when you are done. 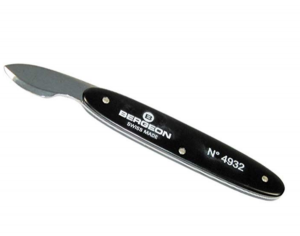 You can’t fix a watch if you can’t get inside, and you can’t fix it if you stab yourself with whatever you were using instead of an actual case knife. I promise you, one trip to the emergency room to get stitches from that tool that looks like a screwdriver they told you to open the case with after it slipped and stabbed your other hand will cost far more than a proper Bergeon Case Opening Knife, even at full retail. If only for safety reasons, this certainly is one of the must-have tools for serious watch repair.

No, a pocket knife, steak knife, or machete will not do the job just as well. 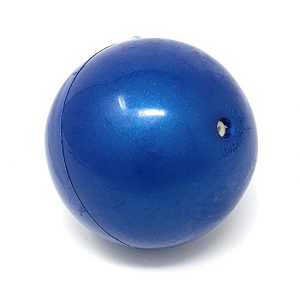 So how do you open a screwback case most of the time? You have a ball! Seriously, they make a case opening ball and it is the greatest thing since sliced bread. The Euro Tool Watch Case Opening Ball is just amazing. Unlike most other rubber balls, this one is super sticky. You know the stuff they sell in little pads to put on the dash of your car that you can set your phone or whatever on and it won’t slide as you turn the corner? Think of a ball made of that same stuff.

Probably 50% of the watches I work on that have screwbacks can be unscrewed in seconds using this, and 100% of them go back together with this guy. You just won’t get it until you buy one and see for yourself. This is the best watch back removal tool for screwback cases.One of the best $10 you will spend in this hobby and certainly one of my must-have tools for serious watch repair.

Yes, I know we just got through talking about two case opening tools or watch back removal tool, but this one is for those screwback cases that just won’t let go. While Bergeon makes the actual Jaxa, the Bergeon 2819-08 Jaxa to be precise, and I love it, I have found that in this case, the cheap imitation openers are just as effective at a tenth of the price. One great example is the JAXA Type XL Case Wrench from F-BBKO which I have been using for years. 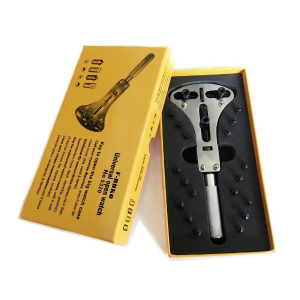 I have to be honest, my cheap one has scratched a few backs so if I was working on a really expensive watch that had a pristine back, I would reach for the Bergeon model.

So what exactly is the difference? The Bergeon version holds the pins very firmly with absolutely no wobbling, and the tips seem to be far better made. That being said, the vast majority of the time the $20 tool works fine.

So if I have the Bergeon tool, why do I use the cheap one at all? Truth is, I don’t own the Bergeon tool, but I have a good friend who has one and I borrow it when I need to open an expensive watch and the ball won’t work. That’s like once a year so I don’t feel the need to buy the Bergeon version. Even though the Bergeon model is better, this one still qualifies as part of my must-have tools for serious watch repair.

There are plenty of videos out there explaining how to use a watch case opener so I won’t go into detail but basically it has three tips that tighten on the edges of the case back and allow you to wrench it open. 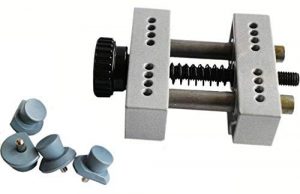 When working on something this small, things get slippery or tend to get sideways in your hand. About the tenth time you drop a movement, or it slips and you mess up something, you will be looking for one of this Case and Movement Holder from OTOOLWORLD.

The basic idea here is that you take the watch case, or movement, and place it on the top of the holder between the four posts. Next, you turn the knob so that it tightens around the case of movement and holds it securely. Now you can hold the holder, or place it on your bench, and be far less likely to have it slip in your hands.

This particular model has two nice advantages over cheaper models; that it is made of metal which means no flexing, and that it has multiple sets of holes allowing it to handle watches up to 70mm. This makes it perfect for everything from the standard size movements all the way up to small pocket watches. 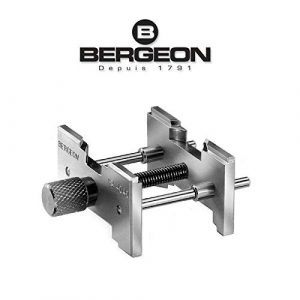 For total transparency, the OTOOLWORLD unit is technically is not a movement holder, but I and many others use it as such. If you need a real movement holder, the Bergeon 4040 is the holder of choice. The difference being that an actual movement holder has sharp edges to bite into the side of the typical round and slick movements whereas the case holder does not.

In my opinion, anything that keeps me from dropping tiny little watch parts has a place on my list of must-have tools for serious watch repair. 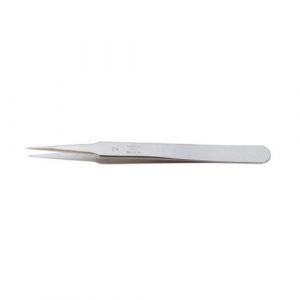 You can’t use a magnetic screwdriver to place screws into a watch or to remove and install small parts, so it is vitally important that you have good tweezers to work with. Top-quality tweezers are the cornerstone of any set of professional watch repair tools. One of the most common ones on the watchmaker’s bench is Dumont Antimagnetic #2 TWZ-302.12 tweezers.

These #2 Dumonts are the workhorse tweezers you will use all the time so they should be the first pair you purchase. Don’t skimp on tweezers, the fine tips will bend and deform on cheaper tweezers making them useless. One good pair of tweezers is cheaper than ten cheap pieces of garbage. You will have a hard time making a list of the must-have tools for serious watch repair without really good tweezers on it.

You may also need some finer tweezers for very delicate work and I would recommend the Dumont Antimagnetic #5 TWZ-202.22 tweezers. While these are extremely handy when it comes to very small work, they are used far less than the #2s listed above so I would purchase them only when I found a need.

Once you start taking a watch apart there are times where you need to walk away from the bench, to help a customer, to clean some of the parts, because you are done for the day, whatever. When this happens you don’t want to just leave a bunch of parts and the partially disassembled movement laying on the desk where dust can get into it, or the cat could jump up and knock it all over the floor never to be found again. 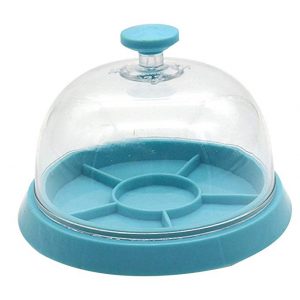 I love these little Domed Plastic Dust Covers and use them whenever I am disassembling a watch. If I need to store the watch and parts longer than overnight, or if I need to work on another watch and need the domed cover for it, then I move everything over to these awesome Covered Watch Part Organization Trays. I have a lot of these trays and love them. If a watch is totally disassembled I may need to use two or three of them but I can stack them, put a rubber band around all of them, and put the watch name or work order under the rubber band. Buy a bunch of these trays, you will need them.

OK, so technically maybe these don’t belong on a list of the must-have tools for serious watch repair because they aren’t tools but try doing this job or hobby without them and you will add them to the list so fast it won’t be funny. 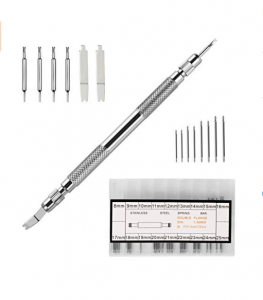 It would be rather embarrassing if you could repair a watch, but couldn’t remove a strap or resize a bracelet. Well, fortunately, my list of must-have tools for serious watch repair can help you with that. The first piece you need is a good spring bar tool like the EFIXTK Spring Bar Tool Set which is a reasonable copy of the much more expensive Bergeon 6111 I typically use. This tool makes quick work of removing and installing spring bars in straps. 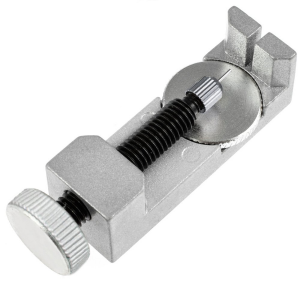 So now you need to remove or put in a link into a bracelet, enter the Zacro Watch bracelet Link Pin Remover which is just an amazing little tool. It isn’t often you can get a cheap, well made, and ingenious little tool that just makes things so much easier, yet here it is. 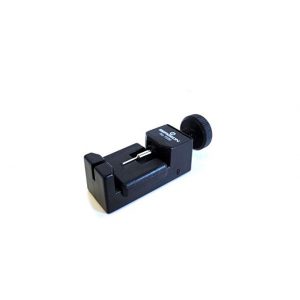 They started by copying the idea of the Bergeon 7230, then made it from metal so it didn’t flex, then made a platform that screws up and down instead of the stupid little plastic shims that the Bergeon uses, then threw in a bunch of replacement tips because they are so thin they tend to bend and become useless, and they did it all for a quarter of the price.

Pay attention here, I don’t think I have ever badmouthed a Bergeon tool before, so when I say this $7 Chinese knockoff is twice the tool of the $30 Bergeon, you can take that to the bank. (anyone want to buy a Bergeon 7230 cheap?)

#10: A great book to learn what you are doing 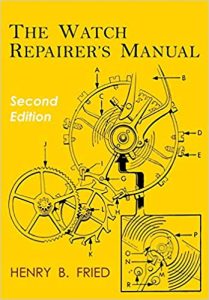 All the must-have tools for serious watch repair in the world won’t help you if you don’t have the single most important tool of them all, knowledge. While there are a ton of great books out there on watch repair, If I had to pick a single one to recommend here, it is  The Watch Repairer’s Manual: Second Edition by Henry B. Fried. Without a doubt, this is one of the all-time classic watch repair manuals.

I hope you enjoyed this list of the Ten Must-Have Tools for Serious Watch Repair!